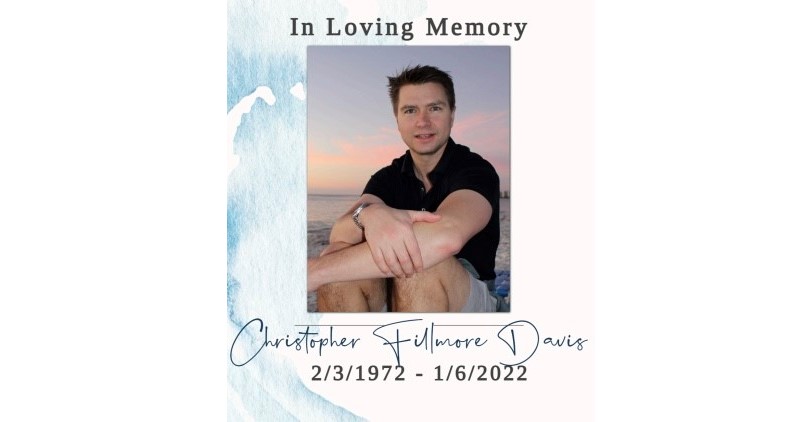 In loving memory of Chris Fillmore Davis, who enjoyed life to the fullest. Born in Halifax in 1972, Christopher Fillmore Davis received his undergraduate degree from Queen’s in 1995 graduating with a degree in Commerce. Chris always had a wide range of interests while at university and throughout his life. He competed in and taught windsurfing, surfed large waves all over the world, was a triathlete, among many other hobbies and interests. While at Queen’s, he worked as a bartender and later worked in finance in Switzerland, Singapore and NYC. He was a devoted husband and father.

Chris enjoyed his time at Queen’s University. To honour his passionate zest for life, adventurous spirit, his ability to balance academic pursuit and commitment to building school spirit; a fund has been created in his name to help other students:

Established in March 2022 by Ralph Davis and Cara Fraser in memory of Chris Fillmore Davis, BCom 1995. Awarded on the basis of demonstrated financial need, academic achievement, and participation in extracurricular activities to students entering first year of any first-entry undergraduate degree program. Preference will be given to students from the Atlantic Provinces (Nova Scotia, New Brunswick, Newfoundland and Labrador, and Prince Edward Island).

Chris’s family and friends have a vision to one day reach the funding minimum of $250,000 to roll this fund into a renewable award which will support the award recipients each year of study for 4 years.

When making your gift in memory of Chris Fillmore Davis, please be sure to fill in the “Dedicate my gift” portion of the online form; this will allow Queen’s to notify Chris’s family of your thoughtful tribute.

You may also send in a cheque, made payable to Queen’s University with "In Memory of Chris Fillmore Davis" in the memo field to:

Residents of the United States

If you are a resident of the United States or an International resident please visit Give to Queen's - Ways to Give (givetoqueens.ca) to make a gift.