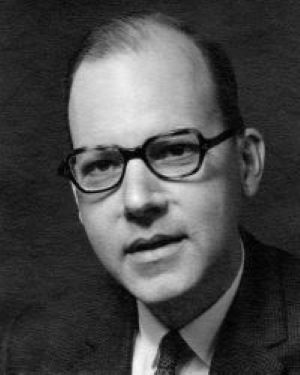 Dr. Hugh Garnet Thorburn (1924-2014) was born and raised in Toronto, Ontario. He entered Victoria College at the University of Toronto in 1942 but left the next year to join the Canadian Army, where he was seconded to the British Army Intelligence Corps. Throughout the rest of the Second World War, he served with the Army, rising to the rank of Captain by the time he was discharged in 1946. He returned to Victoria College, where he completed an honours course in Political Science and Economics, in 1949. From 1949 to 1952, he continued his studies at Columbia University where he was awarded a PhD. He was appointed as an Assistant Professor at Queen's University in 1956. He rose through the academic ranks to Associate Professor in 1963, Professor in 1964, Head of the Department from 1968 to 1971, and most recently to the distinction of Professor Emeritus. He was President of the Canadian Political Science Association, the author of numerous books. and the editor of Party Politics in Canada. Dr. Thorburn passed away in Kingston on June 3, 2014.

To honour Dr. Thorburn's legacy, The Hugh Thorburn Memorial Award is being established in the Department of Political Studies. It will be awarded on the basis of demonstrated financial need and academic acheivement to students in any year of a Bachelor of Arts Honours degree program in the Faculty of Arts and Science with an academic plan in Political Studies.