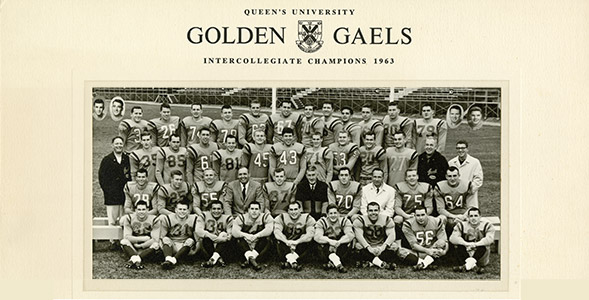 The early 60’s was a golden period for Queen’s Football; playing for or winning the Yates cup in all 5 of the years and winning it 3 times… ‘61,’63,’64. The 1963 and 64 Golden Gaels were two of the very few teams in the long history of Queen’s football to complete two successive undefeated seasons winning the college championship in each of those years. At the induction of the ’64 Golden Gaels into the Queen’s Football Hall of Fame, the members of the team were unanimous in their acknowledgement of the significant role that Queen’s football played in their personal development, and in their careers. The attributes that they acquired as a result of that experience, which were mentioned numerous times, included responsibility, commitment, respect and teamwork, to name but a few. This award represents the intention of the members of all the early 60’s teams to continue this legacy by providing financial support to a worthy recipient who has demonstrated his ability as both a football player, and a scholar.